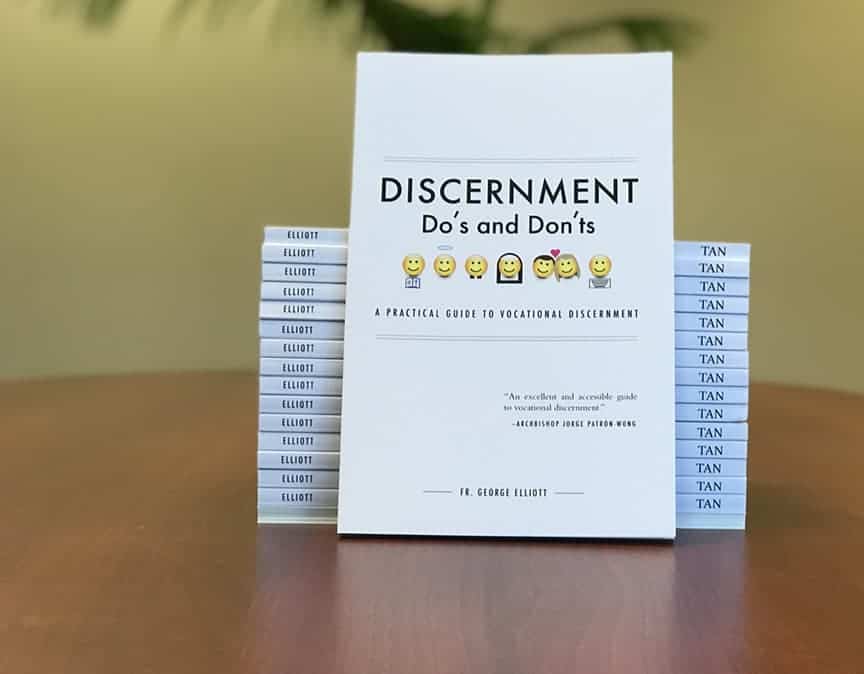 Back when Fr. George Elliot was in seminary, he ran into a dilemma.

He knew he was being called to the priesthood, but after about a year of study, he met some wonderful religious priests from several different orders, and began to wonder, “What if I’m being called to religious life?” 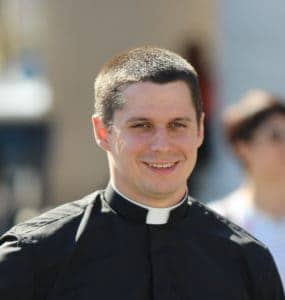 Thanks to a very understanding bishop, he started exploring religious orders and looking for literature to help him discern his vocation.

Eventually, he discerned he was where he was supposed to be—right where he started, in formation for diocesan priesthood. But his detour revealed something important.

“I was looking for books to read,” Fr. Elliot said. “There are so many resources out there. You think you’re called to religious life? Read this. Diocesan priesthood? Read this. Marriage? Here’s a book on dating. But I couldn’t find a practical guide to getting to that point. There are great books and resources and methods to discern in a very theoretical way. There are many practical guides to discerning a specific vocation. I just kind of felt like there was a little bit of a gap there.”

That’s what started him on the path to writing Discernment Do’s and Don’ts: A Practical Guide to Vocational Discernment.

He certainly had a lot of experience to draw from. Ever since seminary, he had been communicating with young people via the Catholic Bytes podcast, which he co-founded. Then, just a few years after ordination, he began serving as campus minister at Stephen F. Austin College in Texas.

Through countless spiritual direction sessions, Fr. Elliot started seeing a lot of similarities in the young men and women he was serving. The first was that the people striving for holiness always seemed to have a much easier time hearing God’s call.

“If we don’t try to do God’s will on the little things, we’re not going to have any idea about discerning God’s will for our lives, for our vocation,” he said. “I can’t tell you how often I’ve been working with someone in spiritual direction and they really get to a point when they desire holiness. Then, their vocation sort of drops into their laps.”

The second was that discernment isn’t just spiritual, or internal. It involves the tangible, too.

“Someone will tell me, ‘I’m called to a vocation of marriage,’” Fr. Elliot said. “I say, ‘Great, who are you dating?’ They say, ‘Nobody.’ You have to have another human being in order to marry! Just like you need a religious order, or a diocese, for a religious or priestly vocation. It’s so easy to idealize a vocation. But you need to get out there, collect information, and make encounters when you’re discerning your vocation.”

Fr. Elliot learned a lot from his own vocational discernment. He spent most of his formative years not thinking much about God. He wanted to excel in school, get a good job, get married, have kids, and live happily ever after, and he figured he’d deal with God on his deathbed. 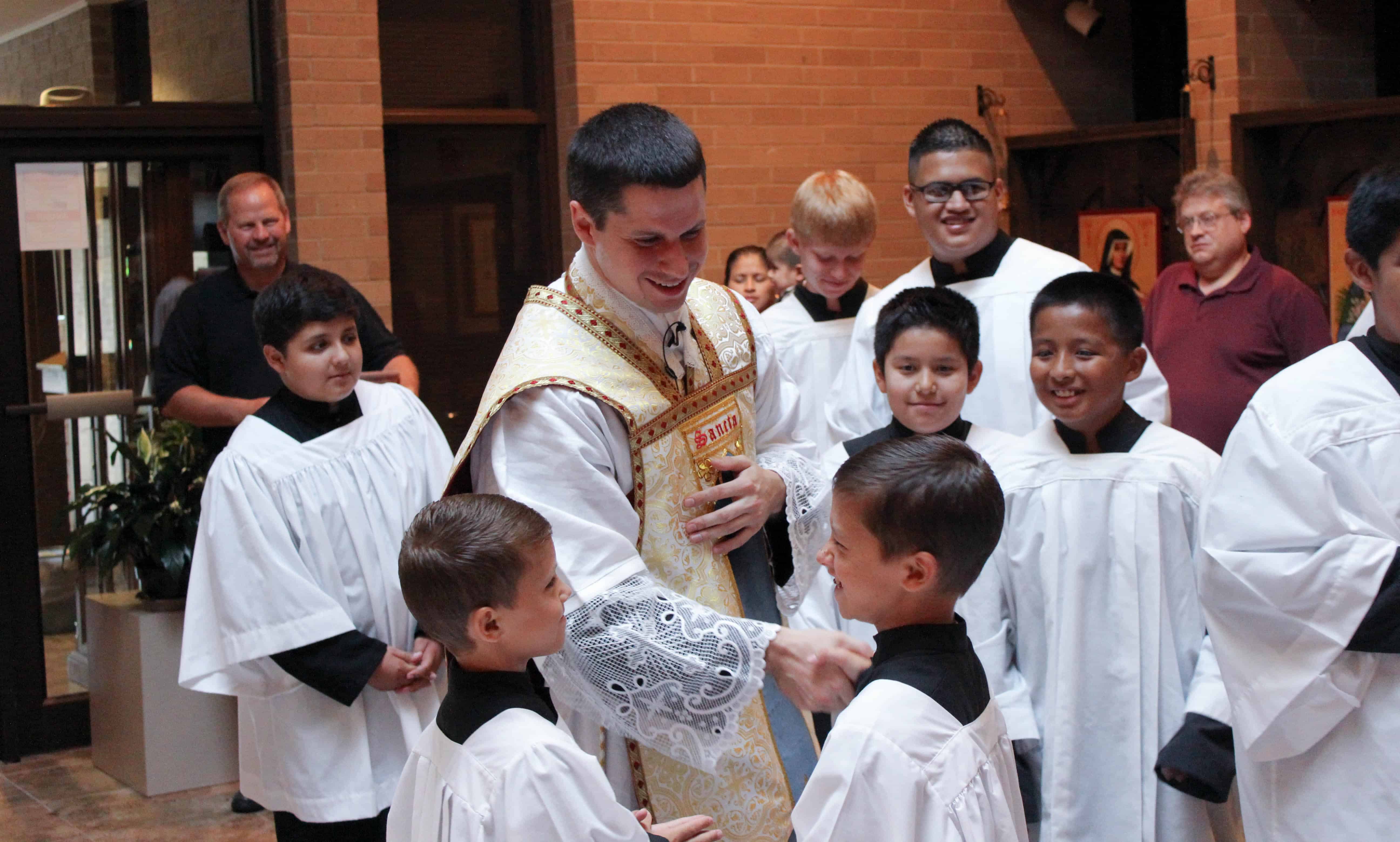 Early in high school, that changed. His cousin, who was around his age, was killed in a car crash. This forced him to start thinking about the present, and stop spending all his energy looking toward a future that wasn’t guaranteed.

“I remember thinking, ‘Okay, if I’m only going to live once, and I don’t know what my future holds, or if I’ll even make it to tomorrow, I have two choices,’” Fr. Elliot said. “‘I don’t need to waste any time on religion if it’s false, and if it is true, I need to make sure I’m living my faith the right way.”

Fortunately during this time, he befriended a new priest in his parish, Fr. Morgan White, through whom he became intellectually convinced in the truth of the Gospel and of the Catholic Faith.

The parish, Our Lady of Victory in Paris, Texas, offered perpetual Adoration, and his family was responsible for having someone there during a six-hour block, so he spent a lot of time alone with the Blessed Sacrament.

“For the first couple of months, I just daydreamed,” he said. “I started to realize, ‘This is actually Jesus Christ. I suppose I should start praying more often.’ My love for the Eucharist started to grow.”

After high school, he enlisted in the Air Force, and his rich prayer life continued. It was there he first heard the call to the priesthood.

“I was at Mass, and I was praying, ‘Lord, I’ll do anything You ask.’ I was thinking of something along the lines of starting a bible study, or praying the rosary more regularly,” Fr. Elliot laughed. “But it became exceedingly clear: become a priest. It took me a while to accept that.

“I was blessed, and lucky. I went to seminary and I had the intellectual formation I needed to get to the point where I was certain I wasn’t being called to marriage. But what if I were in high school, or just in college? I would have no resource to turn to, that says, ‘Start here.’”

So he decided to write one.

Discernment Do’s and Don’ts lays out a clear path and helps young people identify anything that may be interfering with the discernment process, then suggests ways to overcome those obstacles.

It’s one more way to help a young person answer the ultimate question: “God, what are you calling me to do with my life?”

Matt Yogus is a Project Manager at Vianney Vocations and writes from Raleigh, North Carolina