A Valpo Life in the Spotlight: Sister Maria Diana Hartman 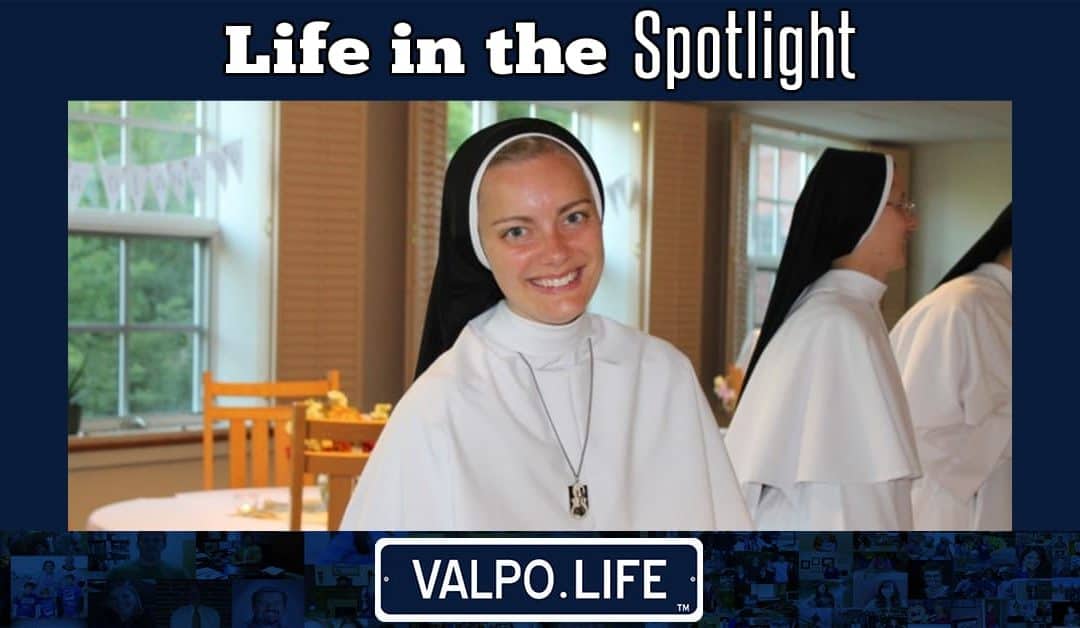 “A vocation is really just an answer to how God has made your heart. God has crafted each of us in a specific way to serve a specific purpose on this Earth, and your vocation is an answer to that unique calling. It’s something you think about all the time; something that fills you with such peace and joy that you know you were made to do nothing else.”

These are the words of Sister Maria Diana Hartman, O.P., a newly professed member of the Dominican Sisters of Mary, Mother of the Eucharist, who made her first vows this past July. The moment she laid her hand on the bible and uttered her promises to God is one that will forever be close to her heart, but perhaps even more memorable will be the journey she took to get to that holiest of ceremonies.

Hartman always had a big heart, and those that knew her growing up recognized the immediate joy that her presence brought to any room. As she grew older, she began searching for ways she could implement those qualities into her future, particularly her future career. As a high schooler, she dreamt of a life full of travel, motherhood, marriage, and helping others however she could. Back then, she was not intent on finding all of this in the form of a religious vocation, but this concept became a thought planted in the back of her mind early in her high school career. One of her first introductions to the joy of religious life came during her freshman year at Andrean High School, where she was taught religion courses by Sister Carol Ann Terlicher, SS.C.M.

“I looked at her and thought that she was really beautiful, joyful, and happy. I knew that joy came from giving her life completely to God, but at that time I didn’t strongly think that religious life could be my vocation as well,” Hartman said. “I always sensed this big desire in my heart to give myself completely to something bigger than myself, but in my mind, I thought that I was too normal or too young to be called to the convent.”

College came and Hartman was doing everything she wanted; learning new things, exploring other world cultures through study abroad programs, and submersing herself into life as a St. Mary’s College Belle. She was happy in all she did, yet something seemed to be missing.

“There was still this gnawing feeling in my heart that there was more out there for me,” Hartman said. “I was fascinated by my studies but I felt unfulfilled, and the prospect of potential future jobs I might have didn’t feel like the answer to my uncertainty either. I didn’t feel like I had an answer to how I wanted to live my life or give my love in this world until the second semester of my freshman year.”

It was then that a religious sister came and gave a talk to her and her fellow classmates, telling her story and how she entered the religious life.

“Everything she was saying completely corresponded to everything I desired in my heart, and I almost felt like she had come there just for me,” Hartman said. “At the end of her talk, I just knew I had to go up and see her. I told her, ‘I’d love to do what you’re doing right now,’ and she led me to their website and encouraged me to research the vocation.”

“I began to look further into it and was very intrigued, but still felt a bit crazy at the time,” Hartman continued. “I still had that small doubt that said, ‘God doesn’t call normal people like me,’ and so I brushed it off to the side again.”

That summer, Hartman traveled to Poland to experience World Youth Day, where she witnessed religious youths living joyfully all around her, changing her perspective on those called to religious life.

“Watching them express such joy through their commitment to God and seeing my own youth reflected in them really got me thinking that maybe God does call ‘normal’ people. Maybe they are normal just like me,” Hartman said. “That’s when I opened my heart to the sisterhood as a real possibility for me.”

Sr. Maria Diana returned home ready to dig a bit deeper into the prospect of sisterhood and decided to tell her family about her thoughts.

“My parents and siblings have always been supportive of me, and they understand that this is something between me and God. I don’t think I would have been able to find my vocation without the kind of family I grew up in, especially my parents,” she said. “They’ve always had such a beautiful marriage, and without knowing that beauty and dignity of marriage, I don’t think I would have been able to fully give it up for this life. One doesn’t enter this life because one is afraid of marriage, you enter it because you recognize how beautiful it is, and yet also realize that there is something even more beautiful – God’s love – that you are called to experience.”

A week later she left for another overseas experience, this time studying abroad in France, which continued to open her heart to the possibility of religious life.

“It was such a beautiful time. I was really exposed to the beauty of the Catholic Church there, and was able to see it clearly,” Hartman said. “When you’re studying abroad there are so many things that can capture your attention, but the biggest one for me was discerning a religious vocation.”

She had been in France about a month when she realized she had developed a recurring vision of her future self, envisioning herself in a habit. She realized that this self-image was her first thought every morning and her last thought every night. It was always on her heart, and she decided to start giving life to this vision daily.

“I had access to so many churches and chapels in France, and I began going to daily mass and spending time with the blessed sacrament almost every day,” Hartman said. “Those were my favorite moments during the day, no matter what else was going on around me. At the end of it all, my favorite place was my quiet time with the Lord, and it was during those quiet moments that I felt Him asking me to give Him my whole heart, drawing me to Himself.”

She recalled the moment she felt certain of her calling during her time spent with Dominican Sisters in the Netherlands over Fall Break.

“I remember thinking ‘this is the happiest I’ve ever been’ the entire time I was with them,” Hartman said. “I saw that those sisters were all in love, their whole life was love. From then on, I thought, ‘Wow, this is what I was made to do.’”

Hartman entered the convent on August 28, 2017, and began her sacred journey as a first-year postulant. A year later she received her religious name, Sister Maria Diana, trading her blue veil for a white one and moving up from a first-year postulant to a novice. She held that role for two years until she traded her veil yet again, this time white for black, and entered her first year under vows this past summer. For Hartman, each of these years was incredibly formative and played a specific role in preparing her for her commitment to religious life.

“As a first-year postulant I was learning how to be a religious, forming my mind and body in the ways of being a sister and learning to shake off some worldly views,” Hartman said. “In my first-year novice, I learned what it meant to be a bride of Christ and felt myself really grow in that identity. Second-year novice, I grew in my identity as a mother and began going out to schools and helping in the classrooms. Spending a lot of time with children developed my sense of spiritual motherhood. This year, my first year under vows is my first year as a wife. I’m learning what it means to be Christ’s spouse, and it is incredibly beautiful.”

Hartman’s journey to find her vocation has opened her heart to experience the joyful life God had always intended for her. It is a life waiting for everyone who is willing to make themselves vulnerable to His call.

“A lot of times people think vocation is only applicable to those going into religious life, but it’s so much deeper than that,” Hartman said. “He has great plans in mind for all of us, whether it be religious life, parenthood, or single secular life. All of us are called to bring life to His great vision, and we just need to be brave enough to pursue our unique call.”

For anyone who is unsure of their vocation or might need some help with discerning it, Hartman encourages finding quiet moments in their life to reflect inward.

“Don’t ever be afraid of a calling you might be feeling. At first, I felt so unworthy of religious vocation that I gave up on it before I even really tried, but that unworthiness really stems from a sense of fear; fear of not being able to live up to the Lord’s expectation for me,” Hartman said. “Over time, I learned that we should not give into that fear. God extends guiding hands every step of the way, and He will never give any of us more than we can handle.”