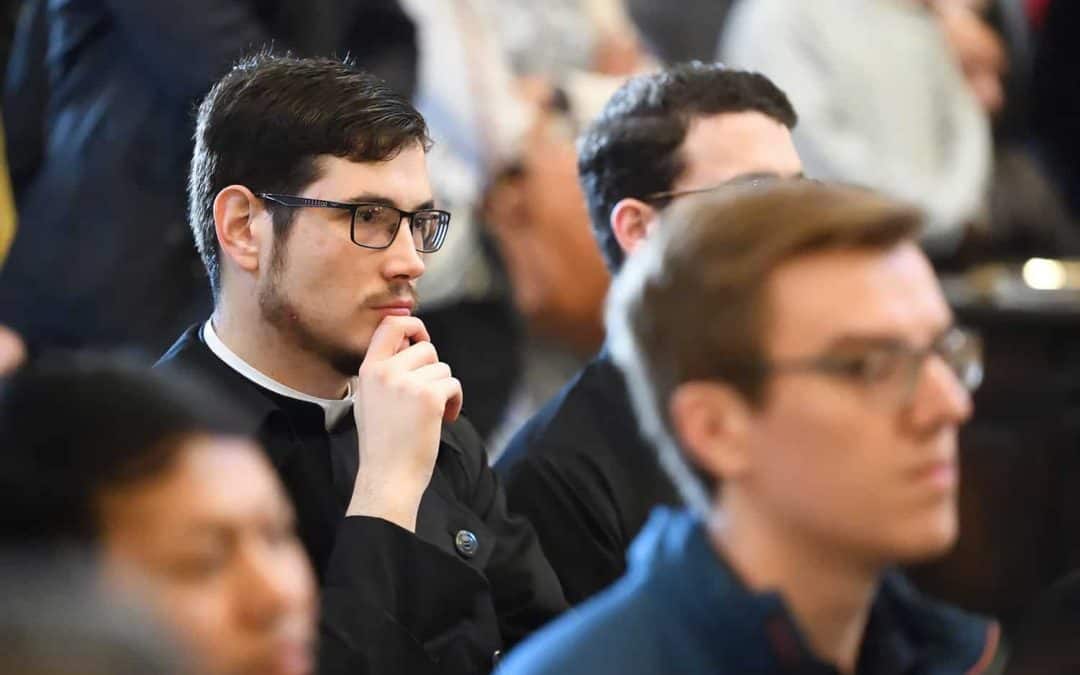 If you’ve ever asked yourself these questions, Fr. Brett Brannen has answers. In his book To Save a Thousand Souls, in a chapter about signs of a priestly vocation, he writes that desire for the priesthood is important, even if it waxes and wanes. But don’t immediately dismiss the idea if you don’t feel an initial strong attraction. Sometimes the desire grows over time. Read the excerpt:

A good candidate for diocesan priesthood should have a desire to be a priest.

A man who will eventually become a priest should feel an attraction to do what a priest does and to be who a priest is. This attraction may come and go in different spiritual seasons, and it is stronger at some times than at others. But for a man truly called to priesthood, the feeling just won’t go away. He might want it to go away and he may try to make it go away, but the desire will remain and it will keep re-surfacing like a submarine.

A man who is really called by God sometimes fantasizes about saying Holy Mass, hearing Confessions or preaching. He catches himself thinking about it. One priest said it this way:

I can remember as a young man in high school sitting in Mass. Rather than listening to the homily (as I should have been doing), I was making up a homily that I would have preached were I the priest. Then I would realize what I was thinking, shake my head, and think, “What am I doing?” I can also remember “playing Mass” as a child with my brothers and sisters. But, as they are fond of reminding me, it was always my idea.

A good candidate feels an attraction to priesthood, though he will often say that he doesn’t know why. I remember a young man saying to me:

Father, with all due respect, the life of a priest just doesn’t look exciting to me. The only thing I ever see my priest do is say Mass on Sunday. He drives a beat-up car. He’s old and not particularly charismatic and certainly not an interesting preacher. It’s not that I don’t love him and appreciate him being our priest; I do. It just doesn’t look very adventurous or exciting. So here is my question: why am I so strongly attracted to priesthood? I just don’t understand.

I told that young man that he is attracted to priesthood because Jesus Christ, the Savior of the world, had placed that attraction in his heart. And whether or not he was particularly impressed or inspired by his local pastor, he was being attracted to the priesthood of Jesus, who offered himself on the altar of the cross to take away the sins of the whole world. Now that is impressive and inspiring! The young man agreed.

I am often asked this question: if a man has all the other signs and qualities of a good candidate, but he does not feel a desire to be a priest, should he go to the seminary anyway? Should he give it “the old college try”? Some men reason like this, “Father, I don’t want to be a priest. But I know the Church needs priests. I think I have at least the minimal qualities, and I suppose I should do it for the Lord. After all, he died for me.”

The Church will survive without that man becoming a priest, I can assure you. I would hesitate to recommend that a man move forward to seminary if he does not have at least some desire to be a priest. The desire may not be especially strong. It may come and go. It may surface at unexpected times, especially after significant “Jesus Experiences” like a powerful retreat, the death of a loved one, or just a sober moment of honestly asking oneself, “What will ever become of me?”

In the early Church, there are precedents of men being ordained who did not actively pursue ordination. The story is told about how God miraculously led St. Ambrose to his vocation. Ambrose was the governor of Milan, and in that capacity was called upon to quell a riot that had broken out over the Arian heresy in the early Church. After he very diplomatically resolved the immediate dispute, a little child in the crowd started calling out, “Ambrosius… episcopus, Ambrosius… episcopus” (Ambrose for bishop). The crowd then insisted that Ambrose agree not only to be a priest but to be their new bishop. And he turned out to be a phenomenal bishop! St. Gregory the Great was also made a priest and bishop by the acclamation of the people.

The Eastern Church has a joke of sorts about this:

Some men are called by God (theocratie)

Some men are called by the people (democratie)

Some men call themselves (autocratie)

Men in the latter group are the dangerous ones! These men may desire to become priests, but for the wrong reasons. They need the priesthood more than the priesthood needs them. We don’t need autocratic men who call themselves to priesthood. A priest is called by God and by the Church to serve others and he experiences a holy desire for priesthood.

From Fr. Brett Brannen’s To Save a Thousand Souls: A Guide to Discerning a Vocation to Diocesan Priesthood