The saint who started World Day of Prayer for Vocations 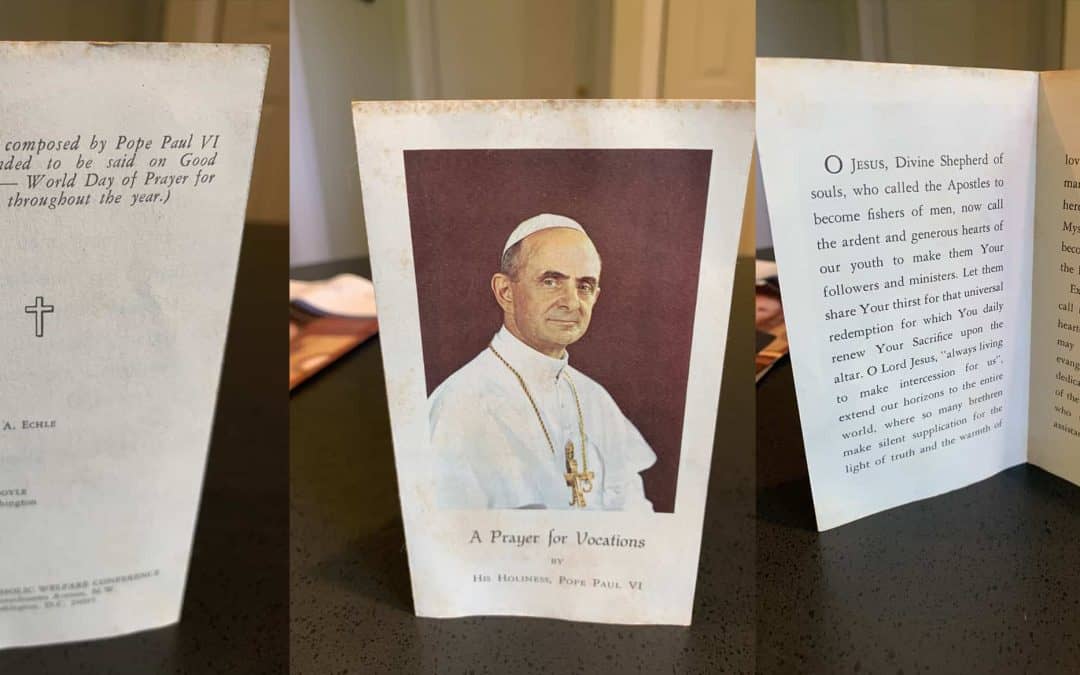 A couple of months ago I ran across my great-grandmother’s prayer book, a small leather-bound tome which had obviously seen a lot of use. As I fanned through the pages, a prayer card fluttered out.

It was a prayer for vocations written in 1964 by Pope Paul VI, who was canonized just last year.

The timing could not have been better. It just so happened that my colleagues and I at Vianney Vocations were right in the middle of preparing for World Day of Prayer for Vocations, which this pope had established some 56 years before.

It got me wondering why the pope had called for such a day in the first place.

Toward the beginning of the Second Vatican Council, Pope Paul VI saw a problem. Among the many challenges the Church faced, one of the most troubling was a drop-off in the number of men entering seminary and women entering convents. We sometimes think this only happened in the seventies, but it was actually apparent even in the late fifties.

So in 1963 this prescient pope established World Day of Prayer for Vocations. It’s not a “feast day,” per se, but rather a call to action. In essence, the Holy Father is saying to all Catholics, “People of God, let’s pray for what we need!”

The thing that strikes me about the pope’s prayer (below) is that he’s not just praying for more priests and nuns. Rather, through this short prayer, he reminds us WHY we need vocations: namely, because our world is in need of salvation! And thus we need men and women who will dedicate 100% of their lives to spreading the Gospel of Jesus.

This year, on the fourth Sunday of Easter, it would be good to make this saintly pope’s prayer our own:

A Prayer for Vocations by Pope Saint Paul VI

O Jesus, Divine Shepherd of Souls, who called the Apostles to become fishers of men, now call the ardent and generous hearts of our youth to make them Your followers and ministers. Let them share your thirst for that universal redemption for which you daily renew Your sacrifice upon the altar.

O Lord Jesus, “always living to make intercession for us,” extend our horizons to the entire world, where so many brethren make silent supplication for the light of truth and the warmth of love, so that answering Your call, many young men may prolong here Your mission, edify your Mystical Body, the Church, and become “the salt of the earth and the light of the world.”

Extend, O Lord, Your loving call to many pure and generous-hearted young women, that they may grow in their desire for evangelical perfection and may dedicate themselves to the service of the Church and their neighbors who so desperately need such assistance and charity. Amen